It was a steamy 90 degrees today before tonight’s fierce, beautiful storm. And all this heat inspired a quick, comforting dinner. How to speed up great eggplant parmesan? Turn things waaaay up.

The oven, I mean.

Battered and breaded homemade eggplant parm is so delicious, especially with herbs in the breadcrumbs and deep-frying in grapeseed oil. But that’s not exactly a time or fat-conscious dinner. So I sped things up with my favorite new way to cook tender, melt-in-your-mouth eggplant.

The secret is in peeling. I had never peeled my eggplant until recently, and its not a steadfast rule to which I adhere. However, I once peeled my eggplant before making my favorite eggplant indian dish Beghan Bharta, and it practically melted into the sauce… scrumptious. 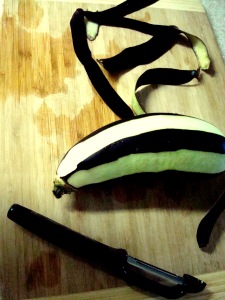 I’ve given up completely on the notion of sautéed eggplant. This vegetable is a sponge, and it’s easy to use up 4 tablespoons of olive oil with the eggplant constantly sticking to the pan. 56 grams of fat later, I find I haven’t accomplished much. That’s why I like roasting or broiling eggplant with just a teaspoon of oil sprinkled over top. Saves on fat and time.

If you really want to cook eggplant in a skillet: slice, salt well, and leave in a colander for about 20 minutes. It’s surprising how much moisture will seep out of these puppies.

Okay, so you may notice I didn’t peel my eggplant all the way. Well, it’s so darn pretty with this zebra look, I left some strips on.

The reason this was such a hot Friday is that I decided to crank the oven up to 500 degrees—honestly, so I didn’t have to wait so long for dinner.

I brushed each slice with a little bit of olive oil and placed the baking sheet under the broiler while heating my pasta water. Though these were thick slices (a little over an inch), they required less than 5 minutes per side until thoroughly browned and cooked through. Granted, I cooked these in my toaster oven for such a small amount. The cooking time may be increased with a full-size oven.

Honestly, I’ve never understood those casserole recipes where you pre-cook ingredients, add pasta and sauce, and then read the instructions to sprinkle with cheese and bake 25 minutes further “until brown”. Well, gee, if you’re in a particular mood to run your oven all day and wait ages for dinner, be my guest. But casseroles brown best under the broiler, I’ve found, so I cooked my pasta to al dente (since it wouldn’t be cooking more than 5-10 minutes in the oven), heated the sauce slightly, and added it to my dish. 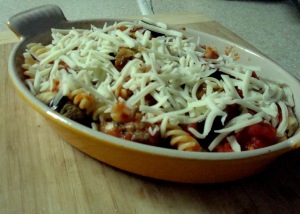 This is an easy meal to fatten up, but with a big, fresh salad from the farmer’s market, I didn’t want something incredibly heavy on the side. As you can see, I sprinkled a light layer of shredded mozzarella and popped it back under the broiler. Barely 5 minutes and it was already incredibly crispy on top.

Though it doesn’t look like there’s enough sauce in this photo, the marinara had a thin consistency, with a lot of tomato-y water covering the bottom of the casserole. If I was baking this for 20 minutes, I would have filled the sauce to the top–little Italian food more unpleasant than a browned, cheesey pasta dish that’s incredibly dry beneath the surface. This is where I found the broiler to be preferable as well, my sauce ratio was ideal, and I didn’t have to be concerned about it evaporating in the heat. 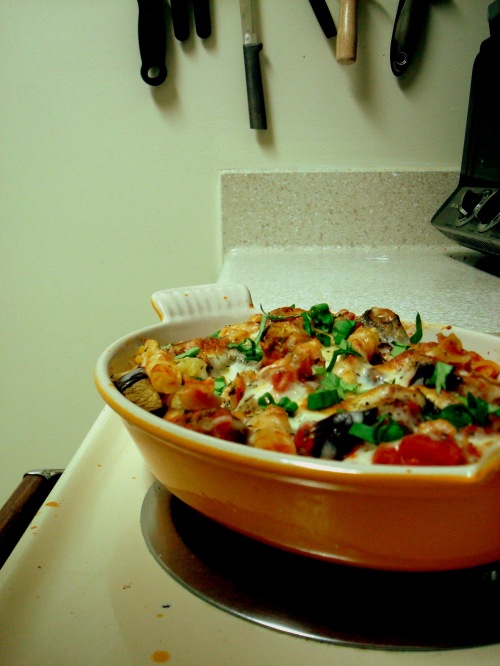 10 minutes to brown and cook the eggplant (cooking the pasta and sauce in the meantime), plus another 5 or so to brown with cheese on top. That’s 20 minutes with some inexpensive pasta, jarred sauce, and an itty-bitty Italian eggplant for less than $2. Homegrown basil on top and, wow, what did I tell ya? Money and time are not the secret to healthy, nourishing food. It’s all about love—for yourself and your health 🙂

Update for the carnivores: my Andrew is getting creative in the kitchen these days, too. I left half the mozzarella and sauce for him to make his favorite dish: chicken parmesan. This version is just as quick and easy as the eggplant concoction above with Andrew’s cooking method:

Cut chicken tenders into 2-inch cubes and place in ovenproof casserole dish. Drizzle chicken with olive oil and bake on 450 F until cooked through. Pour sauce generously over chicken, sprinkle lightly with mozzarella, and dust with breadcrumbs (+ optional Italian seasoning). Place under broiler until cheese and breadcrumbs are browned, about 5-10 minutes.