The humorous life lesson I learned after this dinner. Hours I spend in the kitchen, mostly for my own relief from the day, whipping up delicious things for myself and the hubs. Twelve-ingredient marinades when I make him some handsome meat, or spend hours roasting and puree-ing. But when Andrew called me to say, “That was the best dinner you’ve ever made. Ever. Nope, I can’t even think of one I liked as much,” I know I’ve got to stop putting so much effort into what I’m feeding my mate.

Just an hour between work and a long late-night meeting meant throwing together something simple and filling that Andrew could enjoy at home, and I could pack in my purse. This meal takes truly less than ten minutes. Done.

On my snow day off work, I saw a V8 commercial that said, “Do you ever wish vegetables tasted less vegetabley?” If your answer is yes, maybe this isn’t your dinner.

1/3 can of chickpeas, rinsed and drained (Lindsey’s addition)

fresh mint would be delightful, if you’ve got it

Cut red onion and toss in small bowl with half the vinegar (a handy trick I learned from America’s Test Kitchen to tame raw onion). Whisk olive oil and red wine vinegar in large bowl. Season dressing with salt and pepper. Mix tomatoes, cucumber, bell pepper, red onion, and your protein of choice into dressing. Stir in feta cheese.

Salad can be made 2 days ahead. Cover and chill. 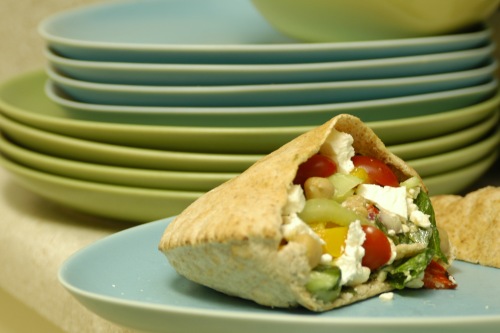 Greetings, friends, I come to you with yet another do-able weeknight wonder. It’s my first week working in Special Education, and I’m certainly low on energy between elementary school and grad school! Delicious and do-able dinners are crucial for relaxing weeknights with Andrew—hence tonight’s indulgent sandwiches: Eggplant and Chicken Parmesan Subs!

When Andrew and I enjoy Italian carry-out, we always order chicken and eggplant parmesan subs. There is never enough marinara on my eggplant—and the vegetables are either dry, heavily breaded with barely eggplant inside, or large slabs of barely-cooked aubergines. Andrew often finds the flavorless chicken too thick, with too little cheese and sauce. We think we love these subs, but so often finish unsatisfied.

These roasted subs are far superior to any local carry-out (unless you reside adjacent to Little Italy). They are simple in assembly and on the plate in less than 30 minutes. 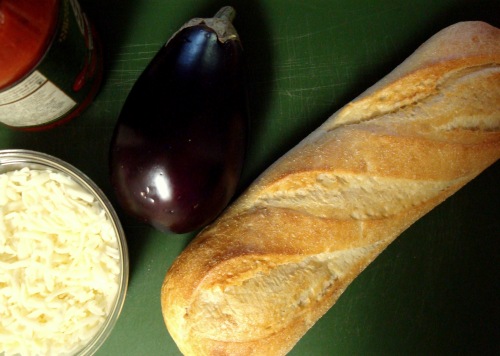 Heat the marinara over low in a small saucepan until assembly time. 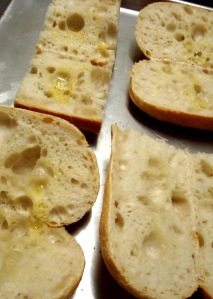 Slice the baguette lengthwise and brush inside with a very light layer of olive oil. Toast on a sheet pan 5-8 minutes at 350F, set aside, and raise the oven temperature to 450F.

Onto the same sheet pan, place the eggplant (sliced in 1/2-inch rounds, halved) with a sprinkling of coarse salt and light brushing of olive oil. If you are roasting chicken tenderloins, click here for my foolproof chicken marinade. Bake the eggplant (or chicken, or both!) until just cooked through. This should take no longer than 10 minutes. 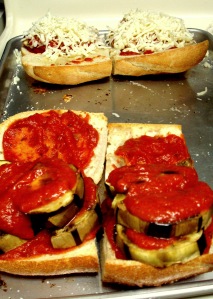 Could this dish be more simple? Heat, toast, roast, and pile it all on.

Though you can assemble all the goodies as you like, Andrew and I spread a thick layer of marinara on the bottom of our rolls, a thin layer on the top roll. Next, the roasted eggplant or chicken, followed by a bit more sauce and a generous sprinkling of mozzarella.

there's really chicken under all that cheese...

Place the pan with the open sandwiches into the 450F oven until the cheese is melted and starting to brown—about 5 minutes.

Serve alongside fresh lettuce with (optional) parmesan shavings and light vinaigrette: juice of one lemon, olive oil and honey whisked in until it doesn’t taste too lemony, salt and pepper and a drop of balsamic. Add one chopped shallot if you have it. Oh do! 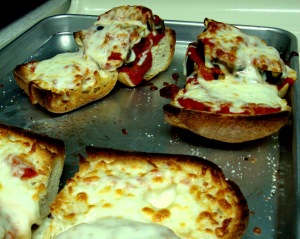 And now you must promise to really, really enjoy yourself. This sub is worth it.